The basic concept of blockchain is quite simple: a distributed database that maintains a continuously growing list of ordered records. In this chapter we will implement toy version of such blockchain. At the end of the chapter we will have the following basic functionalities of blockchain:

We will start by defining the block structure. Only the most essential properties are included at the block at this point.

The code for the block structure looks like the following:

The block hash is one of the most important property of the block. The hash is calculated over all data of the block. This means that if anything in the block changes, the original hash is no longer valid. The block hash can also be thought as the unique identifier of the block. For instance, blocks with same index can appear, but they all have unique hashes.

We calculate the hash of the block using the following code:

It should be noted that the block hash has not yet nothing to do with mining, as there is no proof-of-work problem to solve. We use block hashes to preserve integrity of the block and to explicitly reference the previous block.

An important consequence of the properties hash and previousHash is that a block can’t be modified without changing the hash of every consecutive block.

This is demonstrated in the example below. If the data in block 44 is changed from “DESERT” to “STREET”, all hashes of the consecutive blocks must be changed. This is because the hash of the block depends on the value of the previousHash (among other things).

This is an especially important property when proof-of-work is introduced. The deeper the block is in the blockchain, the harder it is to modify it, since it would require modifications to every consecutive block.

Genesis block is the first block in the blockchain. It is the only block that has no previousHash. We will hard code the genesis block to the source code:

To generate a block we must know the hash of the previous block and create the rest of the required content (= index, hash, data and timestamp). Block data is something that is provided by the end-user but the rest of the parameters will be generated using the following code:

For now we will only use an in-memory Javascript array to store the blockchain. This means that the data will not be persisted when the node is terminated.

Validating the integrity of blocks

At any given time we must be able to validate if a block or a chain of blocks are valid in terms of integrity. This is true especially when we receive new blocks from other nodes and must decide whether to accept them or not.

For a block to be valid the following must apply:

This is demonstrated with the following code:

We must also validate the structure of the block, so that malformed content sent by a peer won’t crash our node.

Now that we have a means to validate a single block we can move on to validate a full chain of blocks. We first check that the first block in the chain matches with the genesisBlock. After that we validate every consecutive block using the previously described methods. This is demostrated using the following code:

There should always be only one explicit set of blocks in the chain at a given time. In case of conflicts (e.g. two nodes both generate block number 72) we choose the chain that has the longest number of blocks. In the below example, the data introduced in block 72: a350235b00 will not be included in the blockchain, since it will be overridden by the longer chain. 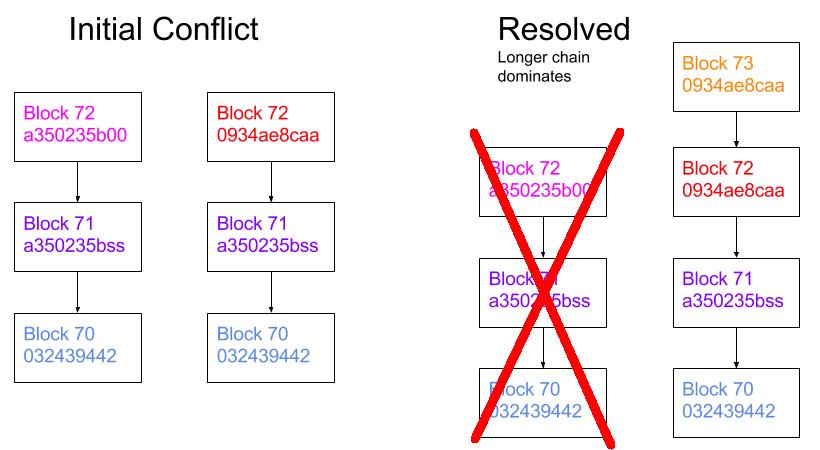 This is logic is implemented using the following code:

Communicating with other nodes

An essential part of a node is to share and sync the blockchain with other nodes. The following rules are used to keep the network in sync.

We will use websockets for the peer-to-peer communication. The active sockets for each nodes are stored in the const sockets: WebSocket[] variable. No automatic peer discovery is used. The locations (= Websocket URLs) of the peers must be manually added.

The user must be able to control the node in some way. This is done by setting up a HTTP server.

As seen, the user is able to interact with the node in the following ways:

The most straightforward way to control the node is e.g. with Curl:

It should be noted that the node actually exposes two web servers: One for the user to control the node (HTTP server) and one for the peer-to-peer communication between the nodes. (Websocket HTTP server)

Naivecoin is for now a just toy “general purpose” blockchain. Moreover, this chapter shows how some of the basic principles of blockchain can be implemented in quite a simple way. In the next chapter, we will add the proof-of work algorithm (mining) to the naivecoin.